No products in the cart.
$0.00 Cart
Start Here Blog
Menu

Sowing the Seeds: How to Start Eating with the Seasons

Arriving at my local farmer’s market last Sunday in Ixelles, Belgium I was greeted with a rainbow-stained deluge of seasonal goods. Farmers and salespeople competed, jovially trying to attract customers by yelling: “The boss is away! Come get your free fruit!”

Zucchini, carrots, cauliflower, fennel, and all the other delicious produce you could dream of were stacked in front of me. But, sprinkled among these in-season goodies were pineapples and other fruits not in season in Belgium, or even in Northern Europe. Those juicy, shiny imported fruits and vegetables got me thinking: what does it mean when we say we’re eating with the seasons?

What Does Seasonal Eating Mean?

I’ll let you in on a secret: no one really knows what seasonal eating means. In a BBC poll of 2,000 people, although 86% of respondents claimed that eating seasonally was important and 78% said they shopped with the seasons, only 5% accurately guessed when blackberries were in season, 4% for plums, and only 1 out of 10 people knew when gooseberries were in season. I honestly don’t even know when gooseberries are in season! (I couldn’t resist and looked it up: late June to early July in England.)

Moreover, is it even possible to eat seasonally in our globalized world? As Thane Prince, the author of Perfect Preserves, told the Guardian, “I think it’s quite tricky, because there’s always something in season somewhere.”

If everything is in season somewhere, am I not always eating with the seasons?

I need to note that I am privileged to have lived only in places where I have had access to foods from around the world at all times of the year. I benefit from a global neoliberal food system that deprives many people (one example) of the means to afford produce native to their locales because they produce fruits, vegetables, grains and more for the richest countries, year-round. Not to mention the disproportionate number of Black and indigenous people who suffer from food insecurity within these rich countries.

I am not writing this blog to convince you to stop eating out-of-season produce, or even to make you feel guilty for eating out of season fruit.  The information I’m sharing will help you make small changes to your diet and the way you think about food. We, the countries benefiting from global capitalism, do need to shift our food habits, but you can’t shoulder that burden alone.

That is why, for me, seasonal eating means balance by eating thoughtfully. It’s doing a little research and knowing what produce is in season in your locale. It’s sometimes buying those fruits and vegetables instead of imported, out-of-season goods. Again, I am not saying drop everything now and never eat out-of-season produce again. I think it’s pretty crazy and kind of wonderful that pineapples are available in Canada during any season! So enjoy that sweet sensory ride. But do think about the trip that pineapple has to take to get to your plate, and consider choosing another locally grown, in-season fruit every third or fourth time you reach for that pineapple at the grocery store. And maybe, when you are ready, we can research “food sovereignty,” a movement to transfer the control over the way food is produced, traded and consumed, from multinational corporations to communities.

Why Should I Eat With the Seasons?

It’s healthier for the planet. Eating seasonal often means you are eating more locally. That means less distance from harvest to plate and less polluting long-distance plane and freight fuel emissions. According to the New York Times, old trade agreements in the rich countries found in Europe, Asia, and North America dictate that international air and sea freight will not be taxed. These agreements support capitalist food systems.

Did you know that short distance, out-of-season produce can also hurt the environment? Sometimes imported produce causes less damage than produce grown in local greenhouses. Eating seasonally means less energy is spent to grow your produce in greenhouses. When the sun heats your food, you save energy.

It supports local farmers. We touched on this point last month in my article. Eating with the seasons often means eating what your local farmers are growing.

You might save money. Buying strawberries at their peak summer growing period will be a lot cheaper than if you were to buy them in December! You might not save more money than if you shop at a huge chain grocery store, but if you are buying local, the produce will be cheaper in-season.

It’s kind of fun to eat seasonally! The produce tastes absurdly good. The sun, the earth, the freshness – mmmmmm! You don’t have to take it too seriously. For me, waiting for artichoke season is like waiting for the next season of Dave Chang’s Ugly Delicious to drop. The wait makes it all the sweeter when, after peeling away the leaves one by one, you finally get to chomp into that soft, flavourful artichoke heart. Eating seasonally is also a cool way to discover new vegetables and fruits you had never heard of!

Four Steps to Start Eating with the Seasons

Taking the time to digest changes in your diet little by little is good for your stomach and your mental health. You don’t need to do it all. Start by learning what produce is in season this month in your locale and grow from there. 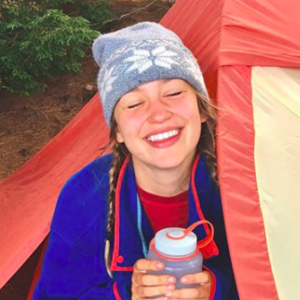 Get our latest Blogs

Straight to your inbox

Feeling Stuck in Life? 3 Deeper Reasons to Motivate You to ACTUALLY Make Change

Compassionate travel: How to actually go in peace

Leave a place better than you found it

We simplify your transition to a more conscious and fulfilling lifestyle.

Traditional lands of the xʷməθkʷəy̓əm (musqueam), the Sḵwx̱wú7mesh (squamish) and the səl̓ilwətaɁɬ (tsleil-waututh)

Get monthly blog alerts
straight to your inbox